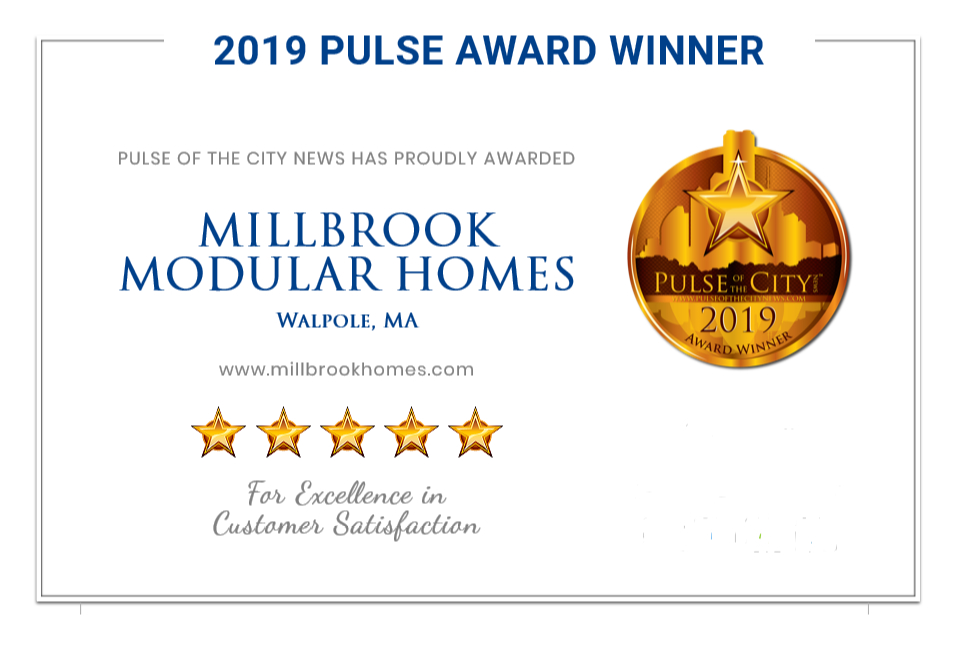 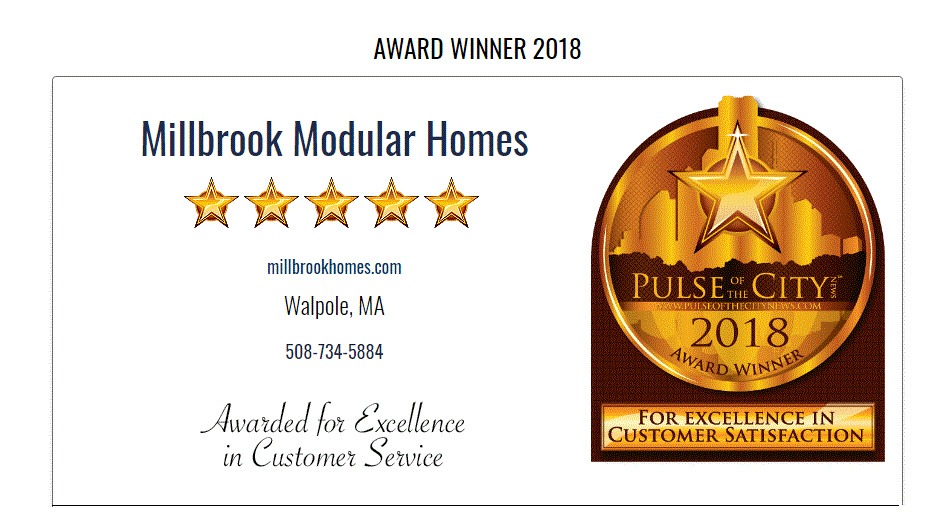 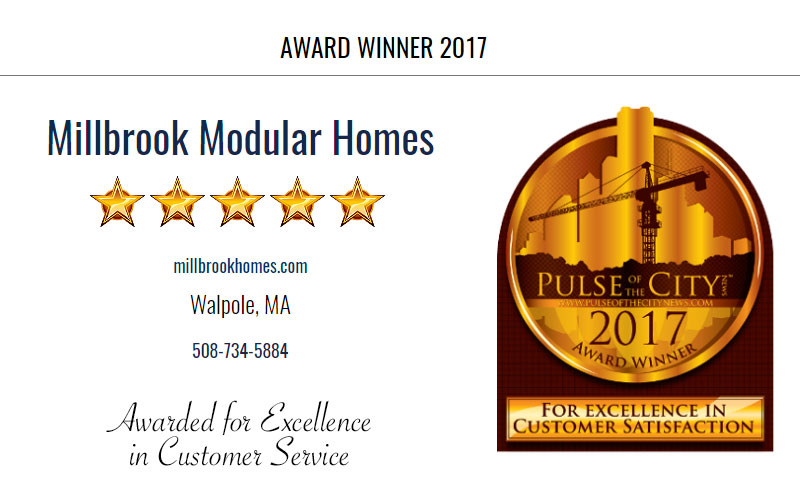 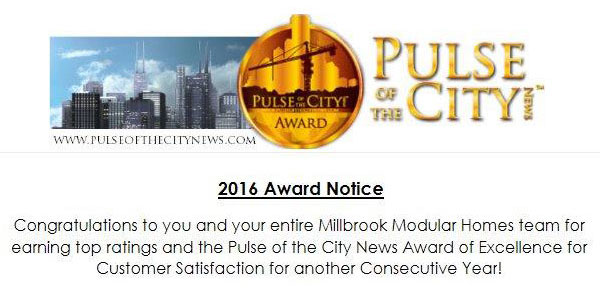 Congratulations are in order to you and your team at Millbrook Modular Homes for winning the Pulse Award with top customer satisfaction ratings!

Our research draws upon many sources to develop a stable, annual rating for the few companies consistently providing an exceptional customer experience. We recognize them with the Pulse Award.

At Pulse of the City News we continue to deliver on our promise to provide a balanced and objective customer satisfaction rating system for the Building and Construction industry.

The Wayland Award Program is an annual awards program honoring the achievements and accomplishments of local businesses throughout the Wayland area. Recognition is given to those companies that have shown the ability to use their best practices and implemented programs to generate competitive advantages and long-term value.

The Wayland Award Program is an annual awards program honoring the achievements and accomplishments of local businesses throughout the Wayland area. Recognition is given to those companies that have shown the ability to use their best practices and implemented programs to generate competitive advantages and long-term value.

About Wayland Award Program
The Wayland Award Program is an annual awards program honoring the achievements and accomplishments of local businesses throughout the Wayland area. Recognition is given to those companies that have shown the ability to use their best practices and implemented programs to generate competitive advantages and long-term value. 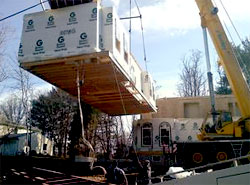 Residents of Minot Road will have some new neighbors as soon as the weather warms up. Still under minor construction, the new home built for 112 Minot Road was pieced together in a matter of six weeks in Pennsylvania and then shipped to Concord in 10 trailer loads. Current Burlington residents Zuber and Bilkish Malek first brought plans forward to Millbrook Homes, which specializes in custom modular homes for residents who know what they want. In this case: the couple wanted 5,400 square feet of cherry hardwood floors, solid granite counters throughout the kitchen and bathrooms, a four-car garage, and 9-foot ceilings with a focus on going green. The walls are 10 inches thick, versus the typical 4 inches, and are filled high-density insulation to prevent energy from escaping. Also built in is a 98 percent high-efficiency furnace and modern high efficiency water heater.

A quick process
The house was delivered on Nov. 22, 2010, in pieces, “and they assembled them kind of like Lego blocks,” said Cary Orlandi of Millbrook Homes. According to Orlandi, farmer Frank Scimone of Minot Road was instrumental in helping house the 10 trucks while they unloaded the boxes. Concord Police also assisted in traffic control. By the end of day one, the cement had been placed and bolted together, and within two days the house was complete with a four-car garage and master suite attached. “The benefits of building your own house is you get exactly what you want, how you want it,” said Orlandi. “Everything is brand new.”

And according to Bilkish Malek, things couldn’t have gone smoother, especially as both husband and wife work full-time with two young kids, and little time to watch over the process from “morning to night,” said Bilkish. “It definitely eased the process,” she said, of Millbrook helping to overlook everything. “Everybody’s on top of it, and I would recommend it to anybody.”

Wave of the future?
The modular foundation was put in within four hours, having already dried in the factory. Made with a high-density cement, Orlandi said the walls prevent against water and air and “that dirt smell” often prevalent in basements. “They started out a while ago and they’ve perfected them,” said Orlandi of the modular foundations. “I think it’s America’s future.” Factories pump out roughly one modular home each day, producing an average of 360 homes each year. Because of this, prices for modular homes range 20 to 25 percent less than a stick-built home, costing an average of $200,000 to $250,000 to assemble from ground up. “It’s fast. It’s quick. It’s inexpensive, and you get it your way,” said Orlandi.

The final construction process consists of finishing the hardwood floors, putting in a fireplace and painting the interior. A driveway made of paver stones will also be put in this spring, once the weather clears. The house has a 10-year guarantee and the foundation is guaranteed for 15. The family hopes to move in by February.

Call us today at 508.734.5884 if you would like more information about our custom modular homes.
Millbrook Modular Homes: Modular Homes in MA, NH, RI, and CT
Fully Licensed, Fully Insured, Long-standing Member of The Better Business Bureau